From Hobby to Multi-Million Dollar Media Brand: Behind the Scenes at Morning Brew

From Hobby to Multi-Million Dollar Media Brand: Behind the Scenes at Morning Brew 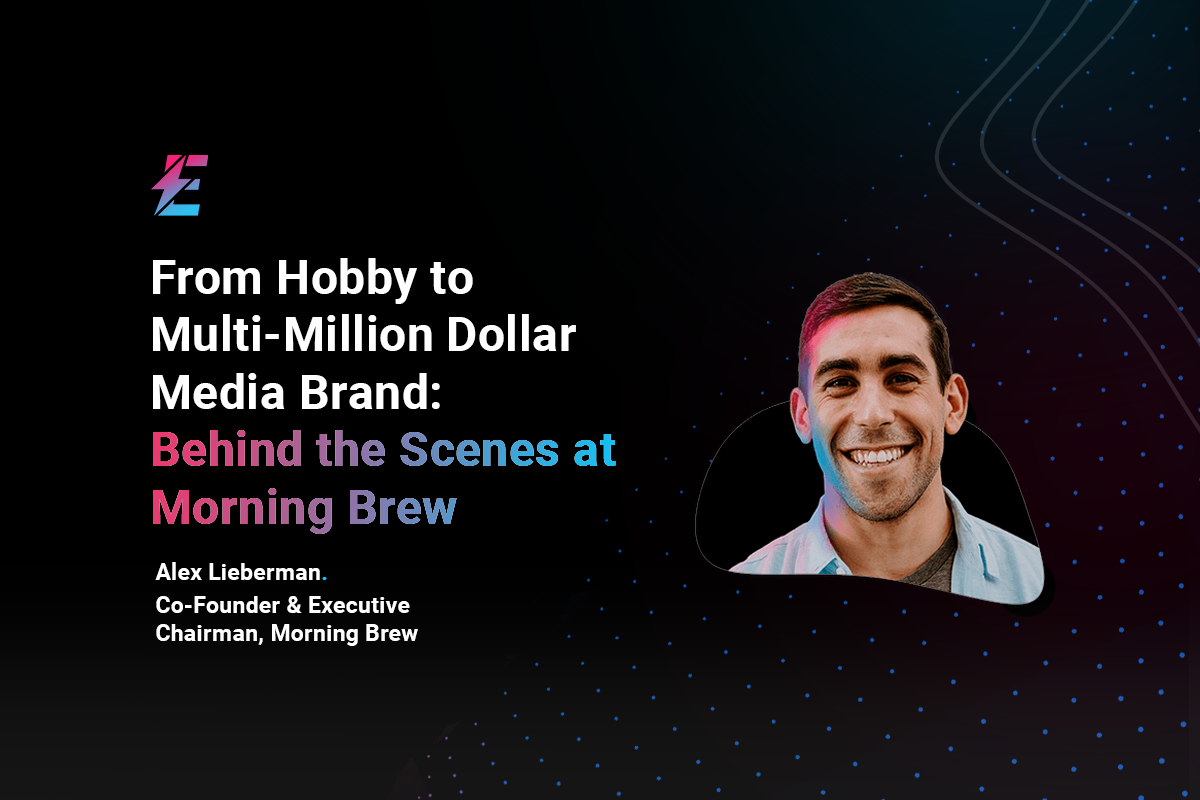 “For a long time, I just had to tune out a lot of my friends who thought it was sheer stupidity to leave my job in finance to do this.”

Alex Lieberman is Co-Founder and Executive Chairman of Morning Brew, a daily business newsletter which paved the way for industry news to have a more casual, conversational style. But Alex is something of an accidental entrepreneur, and the business is a long way from the career he originally envisioned on Wall Street.

At Elevate, he sat down with Ryan Denehy, CEO of Electric, to share how the newsletter began, what he has learned on his journey as a leader, and how Morning Brew evolved into the $75 million media brand it is today.

From Hobby to Business

Morning Brew’s origins date back to Alex’s time at the University of Michigan. With clear-cut goals for a career in finance, his early business newsletters started out as a side hobby to help his fellow students prepare for job interviews.

“I used to ask these students how they kept up with the business world, and they would say they read the Wall Street Journal. I would ask if they enjoyed it, and they would say no, but it was their only option. These kids were working their asses off at careers in business, yet they didn’t have content that told the story of the business world in an engaging and accessible way.”

“So, I started writing a daily business roundup. It was called Market Corner, and it was basically the OG Morning Brew. I took a Microsoft template, converted it to a PDF, attached it to an email, and started sending it to the kids I was prepping for job interviews.”

The newsletter gained traction, despite not having a website or subscription page. New readers got in touch with Alex, asking to be added to the mailing list. That’s when he realized it had the potential to be something bigger. He emailed his readers to ask for their feedback, and received a reply from the person who would go on to become his co-founder at Morning Brew.

“Turns out, one of the original readers was Austin Rief. We met up and he basically spent 45 minutes ripping my newsletter to shreds. And while it was personally provoking to my ego, it was also one of the most helpful conversations I ever had. I have 50 ideas and my brain goes in a thousand directions, so to have someone who was so direct and focused on the most efficient way to get from point A to point B was very complementary to me.”

Alex and Austin launched Morning Brew as an email newsletter in March of 2015. The decision to go full time 18 months later wasn’t an easy one, with Alex a year into his job at Morgan Stanley and Austin just out of school.

“When I graduated, I think we had 10,000 subscribers. At the time, I just couldn’t bring myself to go to my mom, who I had told for my entire life that I was going to work on Wall Street, and say, ‘hey, I’m going to turn down my dream job to work on this newsletter thing.’”

But by September 2016, he decided to make the leap. “I thought about the worst case scenario. If Morning Brew fails six months from now, what are my options? One, hopefully I can go back to Morgan Stanley with a story about how I learned to build teams and raise money. If that doesn’t work, hopefully it’s a good business school application. If I can’t get into business school, maybe I’ll have met people on the startup scene that I can join to build something else.”

“I got four or five layers deep and thought, if I don’t have any options five layers down, that’s not a Morning Brew problem, that’s an Alex Lieberman problem.”

Alex’s second motivator was much more personal. “In junior year of college, my life was fundamentally changed when I lost my dad. He was a perfectly healthy guy and he passed away suddenly from a stroke. As cliche as it sounds, it changed my perspective. It made me realize that doing what I enjoy is really, really important.”

Like many new entrepreneurs, Alex found himself working around the clock with very little balance. “Even if you find balance in your time, I think the second layer is finding mental balance. Because even if you’re not spending all your time on the business, where’s your head at? I was still working, it was just happening upstairs.”

Another obstacle Alex faced was scepticism from those around him. “There were a ton of haters along the way. The most interesting thing is a lot of those haters were actually my friends. It wasn’t that they wanted to see me fail, they just thought I was an idiot. Wall Street Journal, CNBC, Reuters had all been around forever, so what was I doing building this newsletter?”

Embarking on an entrepreneurial path at a young age came with its own growing pains. “Entrepreneurship is a catalyst for growth as an individual, way more so than it is for you as a professional. Sure, you learn how to build and run a business, but I think I learned more about my psyche, what motivates me, what brings me joy, what I feel self-conscious about, and where my ego shows.”

Electric’s CEO, Ryan Denehy, echoed this experience. “One of the benefits of starting a company when you’re young is you’re forced to expose your flaws very quickly. There are very real consequences, but also very real benefits. I was not what you would call a social butterfly in college, but I realized that when I got on the phone in a business context, I could talk to anybody.”

Alex says this is a recurring theme he has observed in entrepreneurs. “High school was a very emotionally insecure time in my life, I didn’t feel comfortable in my skin. Whereas in business, you tell me to sell Morning Brew to any person on the planet, and I feel a crazy conviction. I had never felt that level of confidence in my life.”

“Those experiences growing up are one of the best motivators in business. When I talk to some of the most successful entrepreneurs and professionals, that is a unifying theme. I don’t know if it’s a good or a bad thing, but I have found that having a chip on your shoulder and wanting to prove the haters wrong is one of the greatest sources of motivation for a lot of people.”

Burnout and Managing a Growing Team

Of course, the long hours required to get the business off the ground soon became unsustainable. Alex says he quickly learned the downfalls of taking on too much without adequate resources.

“Because we were being frugal, we didn’t hire enough people. We were always operating at capacity, so as people decided to leave, or someone was sick, or someone went on vacation, something would break. Either the machine would break, or a person would break.”

“That was the first big lesson for us. When you operate at 100%, you’re going to burn people out. Now, with 140 people on the team, the biggest thing is leading by example. A lot of companies are very performative in nature. We say balance is important, but people aren’t going to feel comfortable taking a week-long vacation if the head of the organization hasn’t taken a day off in 18 months.”

This adjustment was especially pronounced as Morning Brew evolved from a small team of young graduates to a more established employer. “In the early days, our team was a bunch of 23-year-old hustlers who were just willing this thing into existence. We were in a 9 x 9 WeWork office, shoulder to shoulder, and we were working all the time.”

“If you look at the Blitz scaling model, as the team went from family to tribe, and tribe to village, that expectation had to change. That was a mental progression that Austin and I had to make. We were going to have people who looked at Morning Brew as a job, and that was okay.”

What’s Next at Morning Brew?

Austin recently took over as CEO at Morning Brew, and now, as Executive Chairman, Alex is focused on supporting strategic decisions, interfacing with Insider Inc. – which bought a controlling stake in Morning Brew in 2020 – and being “the biggest cheerleader of the business.”

Want to learn more? Sign up for Morning Brew here, or check out the recordings of this and other sessions from Elevate on demand.