CEOs & CFOs on the Office of the Future [Webinar Recap]

CEOs & CFOs on the Office of the Future [Webinar Recap] 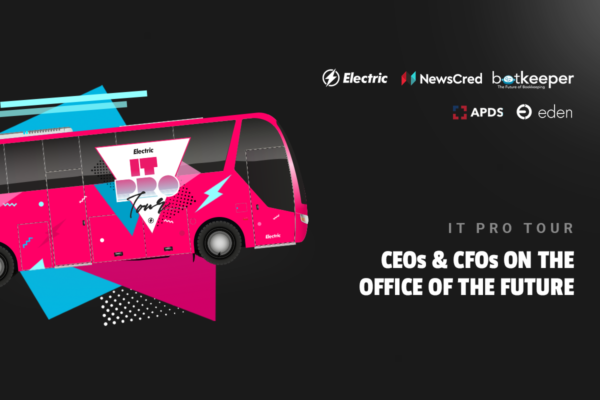 At Electric, we’re dedicated to providing a space for IT professionals at all levels to discuss the challenges and successes they’ve had in the industry. In this installment of our virtual IT Pro tour, we brought together a group of seasoned executives to discuss the office of the future.

Read on to discover more about the factors influencing the change of the future office space and what industry leaders are doing to embrace and fuel change.

The conversation kicked off with Andrea’s question to the CEOs on the panel inquiring what factors drove the most significant positive impact over the last three months for the panelist’s respective organizations.

Enrico Palmerino of Botkeeper responded first, noting that the COVID-19 pandemic played a significant role in improving the company’s ability to function remotely.

CEOs Joe Du Bey of Eden and Ryan Denehy of Electric credited their organizations’ positive change factors over the past three months to being able to reinforce cultural initiatives in the wake of societal movements like Black Lives Matter.

Further, for Ryan, the partnership between HR and IT was also deemed an influential factor in driving positive change as Electric’s employees made their transition to a remote setup.

2. The Trends that Will Impact Future Offices

In changing environments, planning and uncertainty can go hand-in-hand. Andrea asked the panelists, specifically the CFOs, about their most significant planned or unplanned expenses and to forecast if they expect those trends to carry on into the future.

Segun Olowofela of APDS went first. He said that certain factors, like sales and profit margins, were out of their control. However, they had a planned budget on marketing, occupancy, staffing, and T&E, which were severely affected by the pandemic.

Vic Russo of Electric’s sentiments revolved around uncertainty regarding what the future office is going to look like and the factors associated with not having the fiduciary responsibility associated with maintaining a large facility type of setting.

As for whether these trends would continue into the foreseeable future, Vic said, “But I think the time of great volatility has passed, and we have enough to work with now to start making plans for the future.”

3. Is The Office of the Future Even an Office at All?

The physical office model has been around for quite some time. With her next question to the panelists, Andrea was keen to understand how the perspective of either remote or hybrid work models has changed among the CEOs, and whether they think having a physical office space is still worth it.

In his opening statement, Enrico noted, “Perspective has changed slightly. I think we’ve always had remote in our DNA.” He did acknowledge that post-COVID his company has done well without any office space but hoped that they would maintain some physical space for meetings. Still, in general, the company would be going more virtual than before.

Ryan supported the idea of remote working for the future office, adding that it allowed his company to hire the best people regardless of where they were. However, he did bring up some valid points on the benefit of conventional office spaces, particularly for budding professionals like ad-hoc networking, making connections, and in-person mentoring opportunities from managers and colleagues.

Radhika Samant of Newscred also acknowledged the social benefits of having a physical space, adding, “I don’t think you need to be together to work necessarily. I do think that being able to meet to socialize would be much more powerful. Imagine a scenario where instead of spending on rent, we can get our entire company across all three locations together in some wonderful place in the world and just hang out with each other or know each other.”

For Joe, a blend of both physical and remote work was the ideal situation. According to a poll conducted at his office, 95% of his employees wanted to go back to the office, albeit with a few adjustments. “I think I’m seeing some people want to go in sometime and it would be interesting to see if that is a true factor in a post-vaccine world.”

Basically, during the outset of COVID-19, employees believed that a fully remote workspace was the best option. Now, companies are finding that some employees want to come back to the office as parts of the economy reopen.

In a recent study carried out at Electric, Andrea noted that the decision was equally split, and as such, in the future, it’s more likely to have a hybrid approach that balances remote work and physical offices.

4. Maintaining Productivity with Remote teams for the Long Term

Ensuring productivity without physical supervision is a major concern, and Andrea’s next question hoped to shed light on how CEOs would ensure that productivity remains consistent in remote offices.

Segun’s opening statement was quite encouraging. “I’m seeing that our employees are more productive when they are at home.” He noted that the lack of commuting meant employees start work earlier.

Ryan mentioned that productivity shouldn’t be much of a concern. “People love working anyway,” he said. The more significant concern is maintaining a balance and bolstering the company culture, especially among new employees.

Both Ryan and Segun agreed that adding a few days off helped employees get better work, life balance, and be more productive when they’re at work.

Remote work, for some, means using systems and software that could potentially compromise employee, customer, and company data. The CEOs described the different approaches their respective companies were taking to mitigate business risks.

For Joe, “Having the right IT partner for us, especially during this critical moment,” is the best way to mitigate business risks pertaining to customer data. He also mentioned the need to layer the access to data depending on the type of employee.

Enrico recognized the need to have partners like Electric as critical in mitigating risks when working remotely. He also identified human error, like forgetting to terminate former employees’ access as a formidable business risk.

Implementing measures like biometrics, locking phones, and a closed network are also ways of improving security among remote teams. Ultimately Ryan emphasized the need to take action to ensure customer security such as having a third-party security stamp like SOC 2.

Have you taken any cost savings and put them into employee culture?

Segun acknowledged it was still too early for them to predict the future and, as such, had not reallocated any of the cost savings. Vic’s company took a more strategic approach with the savings and used them to ensure that each employee had the right work from home peripherals.

How are you factoring economic uncertainty in 2021 to your revenue projections?

For Enrico, keeping an eye on the pipeline, its different stages, and costing are the main points of concern. He also added that keeping management well-informed on the progress and speed of any processes is vital in identifying lags and potential problems.

In Ryan’s case—employee retention, sales, and marketing are the key metrics in determining most businesses’ future.

Joe had a more unpopular, but practical approach, noting that it was impossible to forecast the events in a situation like this. His forecast has been a lot more conservative, backed up by rigorous communication.

It was evident that all CEOs and CFOs were being cautious in short-term forecasting to keep up with current demands while adjusting in the direction that circumstances and requirements required.

To get more insight, be sure to join the IT Pro community on Slack.