Justin Williams on the Work Behind the Work

Justin Williams on the Work Behind the Work 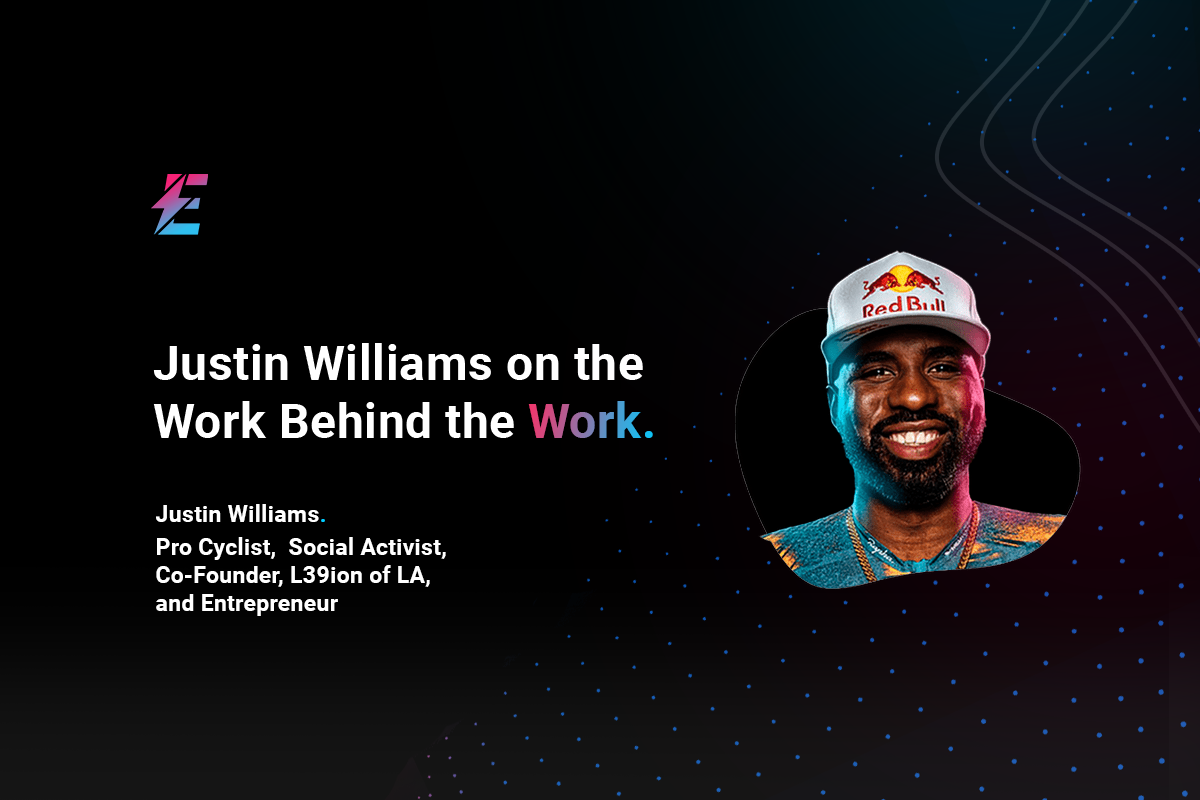 Pro cyclist and co-founder of L39ION, Justin Williams is leading the change in how the world perceives his sport. Credited with driving diversity and accountability in cycling, Fast Company named him one of 2021’s most creative people in business. But change doesn’t just come from putting on a jersey and winning races. Justin joined the lineup of powerful changemakers at Elevate to reveal the work behind his work, the challenge beyond the win, and how he is calling for change in his field.

Born and raised in South Los Angeles, Justin began cycling competitively at the age of thirteen. In a sport traditionally associated with older, white men, he recalls showing up to those early races and failing to see any other athletes who looked like him in attendance.

“I spent 15 years racing bikes and it was just a weird space… Growing as a person and as a man, trying to figure out who you are and what your values are, it was a long journey through cycling. But it granted me so much experience and understanding of what this sport is and what it can be.”

He was taken under the wing of Rahsaan Bahati, the only other Black pro rider at the time, and had a strong mentor in his father. Both men shaped his early experiences immensely.

“I had some really inspirational people in my life growing up. I’ve had that help and support growing up in a space that felt like it wasn’t for me. From the beginning, it was always in the back of my mind that I wanted to give back, the way these people gave back to me.”

This desire to give back and passion for personal growth have stayed with Justin in the years since, and shaped the mission behind L39ION today.

“No matter what age you are, you should always be growing. The only time I’ve ever gotten scared about what was happening in my life was when I felt I was stagnant in my development as a person. You have to learn, and you learn through failure. It’s what you do with that failure that sets you up for the next thing that’s going to come into your life.”

A Detour From Cycling

The path from Justin’s early career to the launch of L39ION wasn’t without its adversity. Disillusionment with competitive cycling led him to take a series of breaks, including a year spent studying his other love: design. “I was almost done with the sport,” he says. But, after some time away, he felt himself drawn back to cycling.

“I realized all the beautiful things that cycling offers. I thought, if I can get this in front of people like me, in front of young people, I know they’ll be inspired. There’s more to it than racing, there’s the industry side of it, the health benefits, and the freedom the bike grants you.”

Justin spent two months convincing his younger brother to start a new team with him. “I wanted to make something that young people would like, something that people felt they could be a part of.”

And so, L39ION was born. “We started with this goal to bring more diversity to the sport, to introduce the sport to people on a different level and from a different perspective. We wanted to redefine what success in cycling looks like in America, and change people’s perception of the sport.”

With his brother on board as co-founder, it was time to find partners. Specialized was the first brand to invest, and from there, other companies followed.

Making a Living From a Passion

Despite this early investment in L39ION, financial stability hasn’t always come easy. Justin was once famously quoted as saying, “there’s no way I could say with a straight face to some kid growing up in a situation like I grew up in that they should dedicate their life to cycling.” He’s quick to clarify that he was referring to bike racing specifically, and with good reason.

“The best thing about cycling is the networking and the people that ride bikes. It’s a level playing field. When you’re suffering with someone and you just want to get to the finish line, it’s a great equalizer. Cycling and getting on a bike, I would 100% tell someone to do it.”

“The reason I say no to the sport side of it is because it has been such a struggle for me, for my brother, and for my team to find our footing in a way that makes sense for people who have families and bills. It just isn’t where it needs to be. That’s one of our massive goals, to set up for a future where you can have legitimate careers in cycling, where you can not only take care of your family, but actually make a very good living.”

As L39ION grows, Justin is planning a series of racing events to bring these goals to life, and show people what inclusive, financially-viable cycling looks like. “We’re going to look at how we monetize, how we make it fun, how we keep a lot of the traditions that people love, and how we make it accessible. It will still feel like a bike race, but there’s revenue generation so we can support our athletes and make sure that they have the best possible life.”

As L39ION continues to grow, Justin is still cycling, and hopes to represent Belize in the 2024 Olympics. Balancing sport with his business ventures is a juggling act he is still learning to manage, he says.

“Keeping the number one thing number one is something that I have a lot of help with, my brother is very vocal about that. Riding comes first, training comes first, racing comes first. But I am always juggling, not every day is easy. It’s just about being smart with prioritization and also being okay with missing things.”

“Compartmentalizing is extremely important because you have to be able to move from one thing to the next without being too hard on yourself. As an athlete growing up, I was always extremely hard on myself, and I took that over into the business.”

“I always try to be a perfectionist, but as a person who is maturing all the time, I understand that 80% of something is good. You can still build and change something from the 80% point. Getting that far is better than not starting at all. Whatever the idea or plan is, if you set realistic goals, that at least puts it out there into the world. And if you have good people around you, they not only hold you accountable, they’ll help you move forward.”

Perfectionism isn’t the only attribute that Justin has carried with him from sport to business. The dedication and focus required of racing, along with his drive to be successful, is now being funneled into L39ION.

“I had a friend that always told me, ‘if you can bring your savage race instincts and tactics to business, you’re going to be very successful.’”

“You have to be very patient about when you pitch something or when you ask for something. It takes time for things to align properly before you can go after it. Patience is one of the things I brought over from cycling.”

“Positioning is another. I know when to “panic,” which to me is that moment to lock in and put all your focus in one place. I also have that hunger to be successful, to not only help myself, but so I can better help the people who are along on this journey with me. That’s a powerful motivator.”

Like in cycling, practice makes perfect when it comes to business. Justin recognizes that any challenges that take him out of his comfort zone need to be faced head on, whether it’s people management or conflict resolution. “They’re all muscles, you have to exercise them. Nobody wakes up one day and becomes great at something.”

Justin’s Advice For Doing The Work

What advice does Justin have for someone starting a business?

“Don’t be afraid to do it differently. I think that the most amazing things that have happened in the world were when someone just got tired of the system and the way something was built.”

“Don’t be afraid to be simplistic in your approach. The world can be convoluted and tell you that you need to do this, and this, and this. I think you just have to take the thing that you’re passionate about, set your goals, and go for it. If it makes sense in your head and it seems like there’s a simple way to reach it, usually it’s that simple. I think people make things more complicated than they need to be.”

Lastly, “don’t be afraid to fail. Failing is growth. It’s literally the only way to get to where you’re going.”

Check out more inspirational advice from powerful changemakers in the Elevate event recordings. We’ll have more coverage here on the blog in the coming days and weeks!