Staying Ahead of the Cultural Curve

Staying Ahead of the Cultural Curve 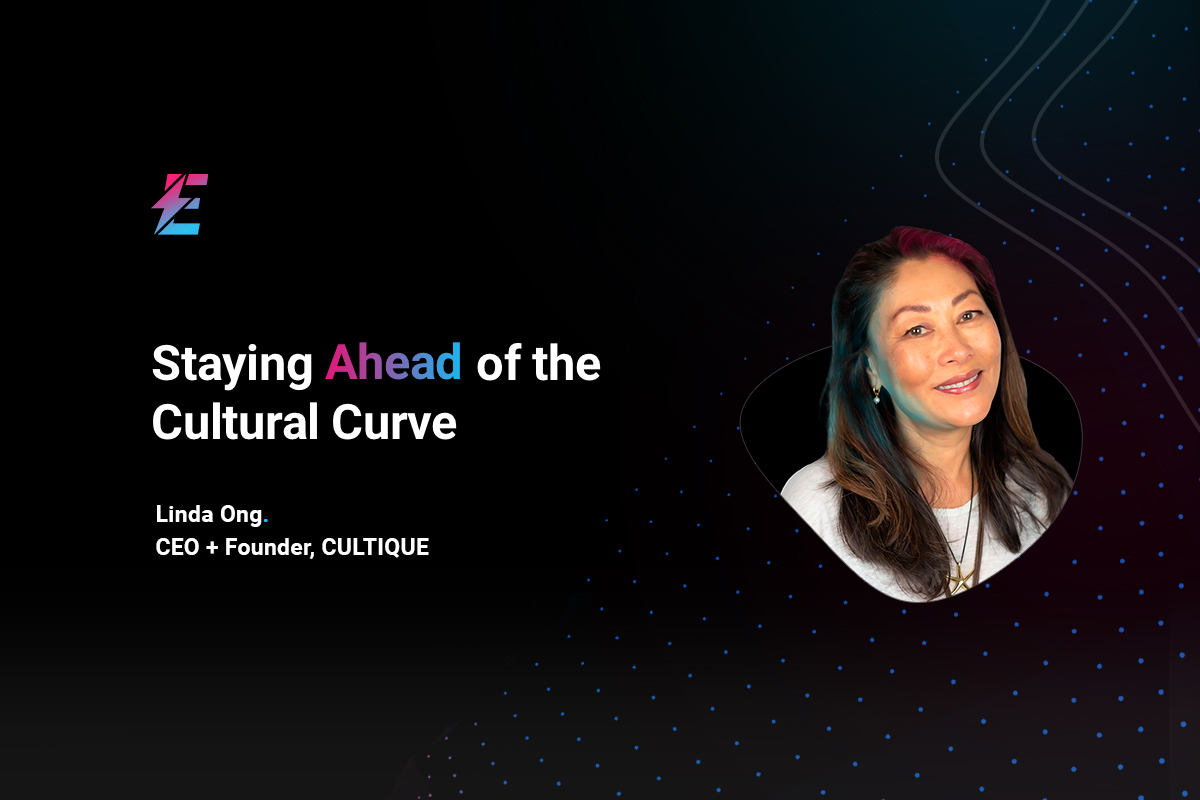 “Culture can be a competitive advantage, if you know how to use it.”

Linda Ong, CEO & Founder of CULTIQUE, is a top consultant and advisor on staying ahead of the curve throughout dramatic cultural shifts. As we push forward through a global pandemic, simultaneously navigating social unrest and a tumultuous political climate, business leaders are on edge. What will revert to “normal,” and which changes will remain? And what’s still to come?

These are the questions CULTIQUE helps leaders navigate. Linda was interviewed by Brand Communications Consultant, Scot Safon, at Elevate, where she shared advice on how the C-Suite can manage multiple, overlapping cultural shifts, and balance external forces with internal workplace culture.

How Can We Define Culture?

The word “culture” can have different meanings depending on your perspective. In the workplace, it typically refers to the values, belief systems, and practices of an organization. Externally, however, culture is the product of a much broader combination of media, politics, art, music, fashion, sport, and more. While these definitions may seem like distinct concepts, they are intrinsically linked.

“I think of culture in somewhat metaphorical terms because it’s a very abstract idea for most people,” says Linda. “One of the clearest ways to think about it is like a weather system. I like to use the analogy that our clients are in the business of building and launching rockets. If you envision yourself as being on a team of rocket scientists, you know you will be using data on past performance, you will be looking for patterns, and you will be focused on finding the brightest and smartest people to build your rocket. But, what you really need is someone to measure the atmosphere. What are the atmospheric conditions that can either help or hinder a successful launch?”

When we look at some of the most high profile marketing campaigns that have faltered on launch, it’s often because the atmosphere hasn’t been taken into account. “When people don’t pay attention to the atmosphere, it’s called being tone deaf,” says Linda. “A famous example is Kendall Jenner’s Pepsi ad. The idea of crossing over conflict using a soft drink was probably a noble idea in the creative room, but when it got out into culture, people saw it as trivializing police brutality. Any time a new message enters the market, there has to be an analysis of how it will be received.”

How Can Businesses Tap Into Cultural Movements?

As Scot highlighted at Elevate, business leaders often see cultural movements as an opportunity to engage with their community, but refrain out of fear of being seen as tone deaf. To strike the right balance, Linda recommends that every organization designates a person to stay on top of culture. While this is typically the CEO or maybe the Head of Research or Marketing, she advocates for businesses to appoint dedicated Chief Culture Officers.

“Everyone’s individual perception of culture is different based on their personal lived experiences. That said, an organization needs to have a cohesive point of view on culture. If you think of every topic that is currently animating people – politics, climate change, the latest movie releases – it’s not about good or bad, it’s about the fact that these conversations are happening in the ecosystem of culture.”

Simply being aware of these conversations isn’t enough. Even though we are all living in the same culture, organizations need their own point of view “to separate the signal from the noise” and identify which conversations to listen to or participate in. This also presents an opportunity to stay ahead of the cultural curve.

“If you watch how those conversations are changing, you can anticipate where the shifts are going to be before the mainstream has even acknowledged it. Before there’s a shift in behavior, it’s always preceded by shifts in conversation.”

Linda gives the example of binge watching, which came to the fore of conversation when Netflix released the entire first season of House of Cards at once. Now, of course, this is standard practice for streaming services. But at the time, the concept of “binge watching” was a novel term that generated a buzz of conversation.

“If you look for the shifts in conversation, you can get ahead of the shifts in behavior, and even sometimes own or leverage the shift. Culture can be a competitive advantage, if you know how to use it.”

For many businesses, the reluctance to embrace emerging cultural trends stems from a reliance on data, and its perceived dependability. Linda urges leaders to look at the full picture.

“Data looks for patterns, it looks for consistent human behavior. But if you look at the pandemic, people are acting very inconsistently right now. We’re working with firms that are actually seeing data contradict itself. Culture allows us to understand why those contradictions exist. Because data is predicated on finding patterns, it’s only as good as the consistency of humans. That’s why you need both data and culture. Data tells you what, culture tells you why.”

“A lot of people today are information rich, but insights poor. Data on its own is just an indication, it’s not an answer. Humans aren’t robots, we don’t behave consistently all the time. Again, it’s like the weather, there are so many variables and systems pushing on each other.”

Never has this been more true than in the past year. No amount of data could have predicted the recent shifts in how we live and work, and the long-term impacts are still unfolding.

“We’ve seen a bigger paradigm shift in the last 20 months than in the last 20 years. It used to be that your life had to revolve around your work. Now, with the advent of distributed workplaces, the work has to fit around our desired lives. The CEO used to be the center of power within an organization – the CEO is still the leader, but the employees have the power now.”

“All of these changes are a complete inversion. This is a seismic cultural event that we’re experiencing right now, it’s going to have profound implications.”

A Blurring of Internal and External Cultures

As businesses navigate the new ecosystem of hybrid and remote work, it’s more important than ever to take external cultural forces into account.

“We’ve all heard of the Great Resignation – 40% of people don’t want to return to work, and 40% of Gen Z say they would rather lose their right to vote than return to the office. What’s happening in the workplace is part of a larger conversation outside of the workplace, and it’s causing people to recalibrate their lives in a very existential way.”

“People are asking themselves, what is the value of work in our lives? What we’re seeing on a massive scale – everyone from low income, hourly wage workers to top level executives – is a real reckoning that the work culture in the ‘before times’ was unsustainable. There is this right sizing or correction going on. We’re in a very tight labor shortage and there is a delta between the skills people have, the jobs they want, and the jobs that are available.”

“The only way to engage people in the culture right now is to meet them where they are. Before, jobs were the shiny object that everyone wanted. Now, the people are the shiny objects and organizations have to go after them. People are negotiating and navigating the relationship between life and work, and life is winning. Employers have to recognize that.”

The way forward? “If you can mine affinities and common values within an organization to create a very tight culture, and align it with the external culture, that’s the secret sauce,” Linda says.

For more insights on staying ahead of the cultural curve and navigating the new world of work, make sure to check out this and other sessions from Elevate, which are now available to watch on demand.