What Is A Spoofing Attack & How To Prevent It 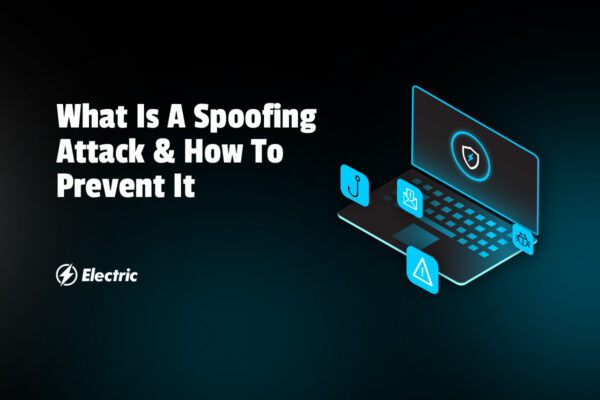 Spoofing might sound like just another buzzword thrown around whenever people discuss cybersecurity. However, like many other cybersecurity threats, spoofing attacks can have a massive impact on a business and should be taken seriously by your organization.

Research by CAIDA shows that around 30,000 spoofing attacks happen daily. These attacks are not easy to stop because they exploit multiple points of contact on business networks. Keep in mind, nearly half of all advanced spoofing attack attempts are now able to bypass leading secure email gateways (SEGs), as hackers elevate their manipulation tactics. The need for businesses both large and small to protect their networks from spoofing attacks is imperative.

What Is A Spoofing Attack?

A spoofing attack is when a cyber criminal pretends to be a trusted source within your network in order to access your systems, emails, phone calls, and website. It tricks your systems to do something beneficial to the attacker but detrimental to you. Spoofing attacks are among the security nightmares cybersecurity experts deal with today.

This type of attack, as mentioned earlier, affects multiple points of a business network. Complex and technical attacks can come through a DNS server, an IP address, or an Address Resolution Protocol (ARP).

Cybercriminals use spoofing attacks mainly to access sensitive information. They can also use them to spread malware, redistribute traffic, or bypass access controls on your network. All these can impact a business by damaging its public reputation and affecting customer trust.

Hackers know that individuals and businesses put in various measures to prevent attacks. Thus, they have diversified their hacking channels and methods to succeed. Here are some of the most common types of spoofing attacks you should protect yourself against in today’s online environment.

Spoofing emails are no different from the phishing scams that are common today. In email spoofing, a hacker uses a false sender address to dupe you that the email is from a trusted source. Such emails come with malicious links and attachments that, once clicked on, expose your network to various threats.

GPS spoofing attacks happen when a cybercriminal manipulates a radio transmitter to send counterfeit GPS signals. For instance, if you’re driving and using GPS, an attacker could lead you to a different location with this attack. The possible implications of a successful GPS spoofing attack can be severe and could lead to losses.

Attackers can also spoof caller IDs and make them appear familiar. Even if they’re in a different continent, a cybercriminal can change their phone number to seem like they’re in your location. Unaware of the threat you’re facing, you pick up the call and end up exposing your personal information.

Website or URL spoofing has also become a common technique used by hackers today. They create a website that resembles a trusted site with lots of traffic, such as Facebook. Unsuspecting users enter log-in credentials, and before they know it, the hacker alters the details and locks them out of their accounts.

Text message spoofing attacks work like email spoofing to a great extent. The difference is that a hacker uses a different phone number or sender ID in place of an email address. They then pose as a legitimate company or organization and trick you into sharing personal information.

IP spoofing attacks involve altering an attacker’s location to get uncensored access into a network. This type of spoofing attack mostly gets used by cybercriminals looking to throw a DDOS attack on your network. It aims at affecting your security system’s ability to filter out malicious traffic coming to your website.

How to Prevent Spoofing Attacks

Here are some ways you can use to prevent spoofing attacks at your organization.

How to Detect Spoofing Attacks

Knowing some signs that suggest that you’re involved in a spoofing attack can help you protect yourself. There are several red flags that you can look out for on your network. For website spoofing attacks, for example, you should click away if you don’t see a green padlock icon on the address bar. It shows the site isn’t safe.

Email spoofing attack signs include things like simple spelling mistakes and poor grammar. A trusted source should also address you by name, so something like ‘dear customer’ should worry you. You should also check attachments and the legitimacy of URLs shared in an email before clicking on anything.

What Are the Consequences of Spoofing Attacks?

As mentioned earlier, spoofing attacks can have a lot of consequences on a business. The most common is the loss of sensitive company and customer information to cybercriminals. According to the FBI, email spoofing and phishing have had a massive worldwide financial impact costing an estimated $26 billion since 2016.

Hackers can use these data to demand ransom, cause downtime, or even affect employee productivity. This makes it vital for businesses to take preventive measures against any spoofing attempts.

Here are some high-profile examples of spoofing attacks:

Spoofing attacks are increasing every day and affecting businesses with an online presence. Preventing them can help stop potential damage to your business reputation and financial loss.

We understand how grievous a spoofing attack can be to your organization and are always focused on providing you with the best-practice recommendations for security management that will keep your organization’s data well-protected. Figuring out all your bases to cover is not an easy process to navigate, especially in times like these— and that’s why Electric is here to support your organization. The 33 IT Terms and Definitions You Need to Know